Did you know I danced with Janet Jackson?
by Ali Handal on January 20, 2011 in Misc
DANCING QUEEN
Waaaaaay long ago, before I was ever a professional musician, I had aspirations of becoming a professional dancer.  And even though I had gotten a late start (anything after age 5 is a late start for a dancer!), and I wasn’t particularly gifted, I threw myself into my ballet, jazz & hip hop classes with a passion.
I eventually moved to LA for college, where I soon found myself taking a year off of school and fully immersing myself into the dance world.  I was taking 2-3 classes a day at Debbie Reynolds Studios in North Hollywood, hanging out with my dance teachers and fellow students, and doing occasional work as an “extra” on TV shows & films.
One of my new friends was a gorgeous woman named Denise.  Denise was married to a director and did lots of glamorous things with Hollywood types.  She had worked for (and dated) Sylvester Stallone, and she actually set me up on a lunch date with Paul Stanley (the singer of KISS)…but that’s another story for another time.

Ali and Denise
THE MUSIC VIDEO
One day, when I was sick with a very nasty cold, Denise called me and said “Ali — come over to the Universal studio backlot — we’re filming a Janet Jackson music video and I think you should come by and be in it!”
HUH???  This was during Janet’s “8121” era (my favorite JJ album).  We had been dancing to virtually every track on that CD in all of my jazz & hip hop classes, and I was gonna get to visit the set — and maybe BE IN — her MUSIC VIDEO?!  Even though I was feeling horrible, I dragged myself out of bed to go to the set.  When I arrived, I found Denise dressed in a stunning butterfly costume, surrounded by Janet’s Rhythm Nation dancers and lots of extras in outrageous outfits — they were filming the video for the song “Escapade.”
I must have been feeling exceptionally awful, because after about 30 minutes on the set, I told Denise that I just couldn’t stay, as much as I’d love to hang out and be in the music video (I think today I might’ve just heavily medicated myself and powered on through…). 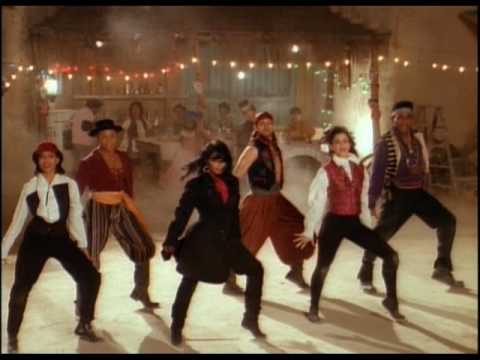 “Escapade” music video
CUT TO…REHEARSAL WITH JANET FOR THE AMAs
Not too long after visiting Denise on the set of Escapade, I got another exciting phone call. “Ali, I’m heading to a rehearsal for Janet  Jackson’s upcoming performance on the American Music Awards.  A bunch of people from the video will be there — you should come and crash the rehearsal.  Just pretend that you were in the video and do the show with us!”
Now, before moving to LA, I had very much been a “play by the rules” kinda girl. If I wasn’t supposed to go backstage at a concert, I never would have thought to act as if I belonged there and simply waltz past security (oh, the valuable skills I’ve learned living in La-La-Land!).
But this was too exciting an opportunity to turn down, and I figured Denise would vouch for me, so I drove to the rehearsal studio in North Hollywood and crashed rehearsal.
Janet was there, and she seemed perfectly normal, for an uber-famous pop star — she looked beautiful and was very polite to everyone she was working with.  The Rhythm Nation dancers (my idols) were there too, and they were SO amazing to watch up close! There were also a bunch of featured extras who had worn cool costumes in the “Escapade” music video (like Denise in her butterfly outfit). All we extras had to do was know which side of the stage to enter from, and when our musical cue was.  Then we’d start freestyle dancing onto the stage. It turns out that our role in the show was – though colorful – pretty brief!
At the end of rehearsal, I lined up with all the other extras, turned in some paperwork, and got all the information I needed for our performance date on the American Music Awards. Nobody noticed that I had crashed the party — and now I was going to get PAID to dance with Janet Jackson on the American Music Awards!!! My first (and last, as it turns out) professional dance gig!

Denise & Ali (and Randy!) Backstage
Backstage at The American Music Awards
I showed up at the AMAs in a cute (well,interesting, at the very least!) little all-white outfit — ready for hair, makeup, and my crazy costume. I had no idea what they’d put me in, but I was excited. The hair person took 45 minutes to curl my hair beautifully, and I was VERY excited to show my face on national television for the first time. Then I went to the lady in charge of costuming, and she handed me some fun clothing — knee-high black and white striped socks and a multicolored dress with a blue and black skirt. At the last second, she grabbed a HUGE, papier-mache mask, and said, “Wear this over your head!”
Now, I had *just* gotten my hair and makeup beautifully done, and I was SOOOO upset that this costume lady wanted me to cover myself up. How would my family and friends recognize me on TV?!?!  I reluctantly took the mask and proceeded to privately consult Denise about my dilemna.  Denise, ever the show-biz-queen-pragmatist, said, “Just don’t wear it and pretend you forgot to put it on.”  I really really wanted to take her advice, but I was just too chicken that I’d be found out, yelled at, and perhaps “never work in this town again!” — so I dutifully put on the mask in preparation for our performance.
Even with the disappointment of having to wear a mask over my face, it was super-exciting to be backstage — seeing all the other extras in their cool costumes, and watching the Rhythm Nation dancers warm up.  They were SO cool! Me & my mask, Denise and dancers
And ACTION!
For this performance, Janet and her Rhythm Nation dancers did a really funky dance number before the featured song actually started.  Every time I see this video, I’m as excited to watch them as I was at that first rehearsal — it’s such cool choreography, and they all execute it so well!
When I found this extremely fuzzy footage on YouTube, I was SOOOO thrilled, and I remembered exactly where our cue in the music was (towards the end of the song). My part in the show was very short and went by too fast, but it is possible to see me onstage very clearly for a split second —  freeze the video at 4:45, and you’ll see me making a dancing fool of myself in the back row!  As you can see, the most professional dance gig of my life didn’t require ANY particular movement skills — but I did have an excellent time getting my groove on!
AFTER THE SHOW
After we danced onstage with Janet Jackson (!), Denise and I changed back into our party clothes and got some photos with the other extras and the Rhythm Nation dancers.  Then it was time to check out the backstage after-party action!
I couldn’t believe my eyes (or my luck) when I saw one of my favorite rappers backstage.  I was pretty starstruck when I saw LL Cool J at the party!  I mustered up all of my little-white-girl-in-a-little-white-outfit courage and asked LL if he’d pose for a photo with me.  He agreed (though I don’t think he was *quite* as excited about it as I was, judging from his expression in the photo!), and my night was officially complete.

Ali & LL Cool J
If I didn’t have the photos and video to prove it, I don’t think I’d believe this story myself…I don’t hang out with many professional dancers or pop divas these days. (Rock stars, on the other hand…)
All in all, it was fun, exciting, and one of my first true “Hollywood” memories I made in LA.
SHARE TWEET SHARE PIN
Dance Hollywood Stories