You Get What You Settle For
by alihandal on December 4, 2015 in Blog

I remember the moment I had to stop ignoring my truth. I was a senior at UCLA, a straight-A student in Psychology, on track to apply for a PhD program as soon as I graduated. Working on my honors thesis in front of my Apple SE computer, I thought to myself, “I hate writing papers.” Kind-of a problem if you’re gonna go for a PhD…

But I was miserable. Four years before, I’d chosen to attend college in Los Angeles – mostly because that’s where Guns n Roses was from. But I didn’t have the self-confidence (or let’s face it, the guitar chops…yet) to follow my dreams of being a professional musician. So for the next four years, I went to concerts and chose to date every long-haired guitarist I could find, while my own guitars sadly sat in their cases, neglected.

Dating all those musicians was its own special nightmare experience, but that’s another story for another time. Back to that moment in front of the computer…

I envisioned a dingy future laid out in front of me – one of churning out paint-by-numbers papers while my stomach was tied in knots, knowing I was ignoring my true calling to be a professional musician.

A few years before that moment, I’d given up my music major due to a vocal cord injury. I figured that even though I loved singing, it had always been a struggle for me anyway. I was by no means a “natural.” Even before my college years, I could never get my voice to sound the way I wanted it to, and despite singing in two high school choirs, I was never cast as the lead in my high school musicals. So I focused on my guitar playing, and I got pretty good. But as a teenager I never joined a real band that performed – I was way too unsure of myself, and being a harsh perfectionist, I was terrified to be seen in public playing a wrong note. I didn’t know anyone in the music business, and I certainly had no family connections.

I was an artist struggling to be born.

I had NO reason to think I’d be successful, but I just couldn’t stand NOT making music the center of my life anymore. I was depressed and questioning my life choices every single day. I’d had it with being a frustrated musician who only *dated* guitar players. I wanted to BE the guitar player in my relationships!

Fast forward two decades, 3 albums, multiple TV appearances, international tours, a guitar instructional book & CD released by a major publisher, plus a thousand other musical experiences along the way – and I can confidently say that I’ve found my way.

It wasn’t easy – and it’s still not – but in my experience, nothing worth doing is.

I have a philosophy – actually, it’s a quote from the movie Thelma and Louise (thanks, Louise!), but I’ve since adopted it as my own personal philosophy:

You get what you settle for.

There are hundreds of times I could have quit (or never even started) being a professional musician. Hundreds of reasons I might have quit and chosen a different path. When I had inexplicable wrist pain that prevented me from playing guitar for a year, when I didn’t know how I was gonna make rent as a struggling singer-songwriter, when I wasn’t chosen after my auditions to play with OK Go, or Adam Cohen, or P!nk, or EVERY TIME I went to see another guitarist play who could play CIRCLES around me and I went home questioning why in the world was I even TRYING?

I didn’t settle for being a “rhythm” guitar player who couldn’t play a rippin’ guitar solo. Even though I was repeatedly discouraged by what a crappy player I was through high school, college, and all of my 20s, I kept picking up that damn guitar (sometimes after having put it down for months at a time) until I got good. really good. And after I got really good, I kept practicing, till I could play my hero Jimmy Page’s lead guitar parts while singing some of my favorite Led Zeppelin songs (something I *never* could have imagined being able to do as a teenager).

I didn’t settle for being a mediocre singer either. I continued improving over the years through workshops, private lessons and hours of practice, until I became a great singer, getting hired by Neil Young and Paul Willams for vocal gigs, and being asked to perform for the opening night VIP party at the Les Paul Museum.

You get what you settle for extended to my personal life too. In my 20s and early 30s, I spent countless nights alone, wondering why I was still single, and kissed many, many (many) frogs until I finally found my prince, or, as I like to call him, my “magic man.” (I married a professional magician…and, as it happens, a very talented fingerstyle guitarist. Turns out dating guitar players is a hard habit to break!)

These days, what I refuse to settle for is a “small” music career. My music is made to be shared. I play music for the human connection. From me to you, from others to each other. And for that to happen, the music must be heard.

So *thank you* for taking the time to listen.

You can instantly download the song “You Get What You Settle For” when you order a copy of the CD That’s What She Said.

Thanks again for listening, and for connecting with me through music. 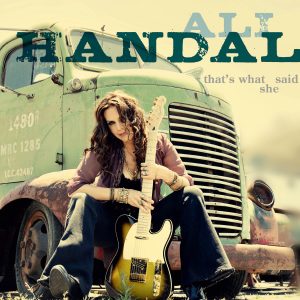