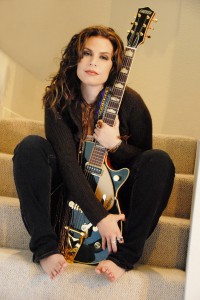 New York-born, LA-based artist Ali Handal holds her own among the ranks of fierce female performing singer-songwriters. She sets the stage ablaze with groove-heavy songs, fiery guitar passages and soulful lyrics delivered by her powerhouse voice. Music Connection magazine describes her as “earthy, natural, real and loaded with talent…a singer/songwriter with something to say… a gifted artist who brings insight and intelligence to her art.”
When asked about her music and stage presence, fans simply say “badass.”

Ali’s toured Australia, Japan and beyond, provided backing vocals for Neil Young, and shared the stage with songwriting legend Paul Williams as his featured vocalist. Her songs have been featured in numerous films and hit shows like Sex and the City, Dawson’s Creek and iCarly. Also a published author, Ali penned Guitar for Girls (Hal Leonard), an exceptional guitar method book & CD brimming with advice for aspiring musicians worldwide.

Below are a few mixes from Ali’s forthcoming fourth album, as well as two live video clips (one full band and one solo acoustic).

You Get What You Settle For:

The World Don’t Owe You a Thing: