Indy’s Infamy: Toilet Training For Cats
by Ali Handal on April 23, 2008 in Indy the Cat

Okay, so I have a confession to make. For the first three months of 2008, I put quite a bit of effort into toilet-training Indy & Pumpkin (my two 11-year old cats). I had bought a book at Christmas time — How To Toilet Train Your Cat in 21 Days — and 2008 was gonna be the year of no more nasty litterbox or toxic blue kitty litter to deal with. 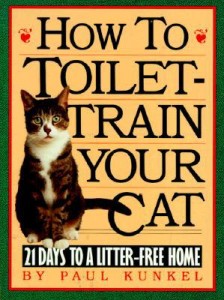 I was determined to make it work — I moved the litterbox right next to our downstairs toilet, and every few days I’d put another magazine (usually Oprah) under the box to make it just a little bit taller, so that eventually the kitties would get used to jumping up to do their business.

The next step was to go out and buy an extra toilet seat to tape onto the top of their box and hope that SOMEHOW they’d figure out how to sit on top of the seat, yet do their thing in the box. (so now their litterbox has a big toilet seat taped to the top of it, in the hopes that the cats will sit on the seat and “go” in the litter below)

At first, I thought it was working — I’d be gone all day and come home to find “success” in the litterbox. However, to make sure that they were doing “it” correctly, we set up a video camera (aka ToiletCam) in the bathroom, and turned it on to see if we could catch them in the act.

ummm…have you ever walked into a bathroom and seen a video camera staring you down? Even if it’s not on (which it wasn’t while we were home), it’s pretty disconcerting!

ANYWAY, we did end up catching them on video — and it was hilarious. Here was my huge fluffy cat Indy, cramming himself into the litterbox, standing in the litter as always, surrounded by this big toilet seat, trying to do his thing the best he could. 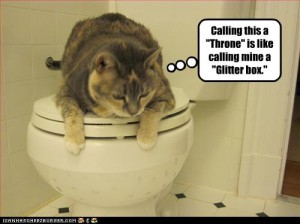 After I finally caught my breath from the laugh-fest, I decided that this was just about all the kitty humiliation I could subject my beloved babies to, and I surrendered to the fact that my 11-year old cats (senior citizens in kitty years) should be left in peace to do their thing the way they knew best.

For those of you who are curious to see the results of kittycam, unfortunately, it appears that we’ve taped over the most incriminating (and hilarious) evidence.  However, for your entertainment purposes, I’ve scoured the internet to find a few photos of other kitties doing their business in a rather unconventional manner.  Enjoy! 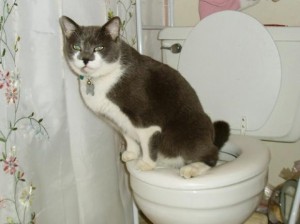 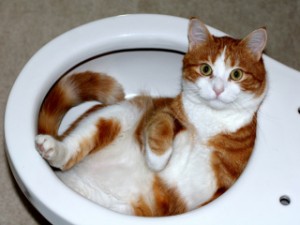