At 9:30pm on a Wednesday night several years ago, I got a call to be part of a vocal session taking place the next morning in Studio A (the “big room”) at the iconic Capitol Records studios in Hollywood. I had been recommended by a singer friend, and when the vocal contractor called me about the session, she told me that the gig was to sing on a new Neil Young album.

Thursday morning I showed up at the Capitol Records building, along with 99 other singers, for a 12-hour session of backing up Neil on ten songs.  After checking in at the gate and signing in at the front desk, I walked the legendary halls of Capitol Records Recording Studios, which is lined with black and white photos of Frank Sinatra, Nat King Cole, Dean Martin, John Coltrane, Keely Smith, and more of the artists who recorded their most beloved recordings in the very studio I was about to enter. 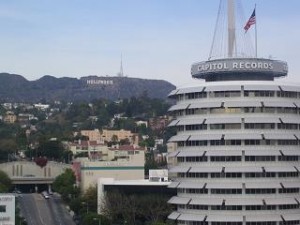 The session itself was really fun, with the Living With War choir (me & the 99 other singers) reading lyrics from a huge screen at the front of the room, taking cues from our vocal contractor.  Some of the work was pretty easy – everyone singing the same part in unison – but some of it was quite challenging — try getting 100 singers to *exactly* match Neil Young’s timing, pitch, & inflection on every line in a song!

If you’ve heard the album Living With War, you know that it’s a VERY political CD, and at one point, when the whole lot of us were repeatedly belting out “don’t need” at the tops of our lungs (as in “don’t need no more lies”), I felt like I was in a recording session for Pink Floyd’s “The Wall” (“we don’t need no education…”) — it was very cool!

It was exciting to be working on such a high-profile session with so many of my friends, as well as having the opportunity to sing and hang out with icons of the session-singing world — we’re talking about people who’ve sung on albums with Stevie Wonder and in classic Walt Disney films I grew up watching as a kid.

Not to mention working with the legendary Neil Young himself — he was there the whole time, supervising and occasionally helping us fine tune our vocal parts. We ended the evening by singing “America The Beautiful” all together — it was a moving end to an emotional and exciting day, and it was captured on film in the America The Beautiful mini-documentary. 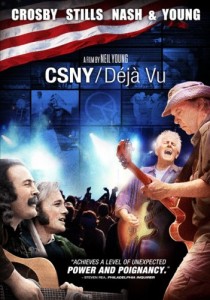 If you watch the 2008 documentary film CSNY/ Déjà Vu, you’ll see several segments of Neil working with the choir, in addition to live footage of Crosby Stills Nash & Young’s “Freedom of Speech” tour and the surrounding controversy. When the film came to theaters, I went to see it with my mom and lo and behold – there I was – singing in the choir right up there on the silver screen! And, yes, as you can see below, I did meet Mr. Young after our recording session. He was very friendly and incredibly gracious to pose for a photo with me.

It’s moments like these that make me feel incredibly lucky to be a professional musician. I’ve been overcome with gratitude many times in my career, and I recently expressed these feelings through a song I wrote called Lucky For Me.

This songs is not yet available for sale, but as a thank you for being one of my subscribers I want to give it to you for free – no strings attached. 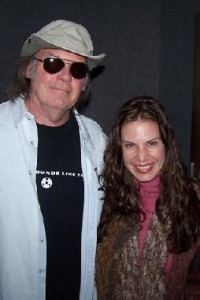 If you like the track you might also consider checking out Make Your Move. It’s my latest album and full of rock songs with attitude.