All my life, I’ve felt an intense connection to the music of Led Zeppelin.  From the moment my eighth-grade crush David Conklin turned me on to “Over The Hills and Far Away,” I was hooked! The largest wall in my bedroom was dedicated ONLY to Led Zeppelin posters; Van Halen, Iron Maiden, Ozzy, and my other metal heroes were relegated to the remaining walls. 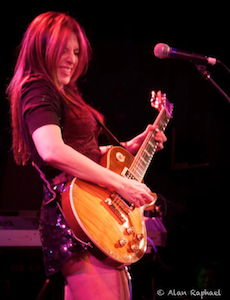 Yet, as much as I worshipped the music of my favorite band, and as much as I knew it by heart when I heard it, I never attempted to perform their songs. It almost felt sacrilegious – who was I to dare bring myself to sing or play the music of my idols? Who would want to listen to me play this incredible music, when the real thing was so magnificent?!

There was also the problem that, for much of my life, my singing voice was simply not strong enough to even attempt some of the vocal feats of Robert Plant in his heyday.  Though my voice was deep enough to hit most of his low register, I couldn’t get my rock scream on to save my life (literally: as a kid I used to worry that if I were ever attacked, I wouldn’t be able to yell for help – thankfully, I don’t have that problem anymore!).

So, I continued simply listening to my favorite band, composing my own music to play and sing, and incorporating my own unique take on a select few cover songs (e.g., my hard rock version of My Sharona).  As my voice strengthened through lessons from several teachers, I increasingly felt the desire to incorporate the music of my favorite band into my live sets.  I’d throw a Jimmy Page riff or two into my solos, and once I even did a full show where I inserted a little bit of Led Zeppelin into each of my original songs (sometimes it was just a melody, sometimes a chord progression, sometimes Robert Plant’s lyrics over my own melody).

A couple of years ago, I started studying voice with my current teacher, Kris Feldman. Kris helped me open up and strengthen my voice in ways I never thought possible.  FINALLY – maybe I could approach singing and playing the songs that resonate most strongly with my rock n roll soul!  I got my first opportunity when I found out I’d be performing one song at WesFest 2013.  I’d get to play with the rhythm section from heaven – Joe Travers (Billy Idol, Duran Duran, Zappa Plays Zappa) on drums and Bryan Beller (Joe Satriani, Steve Vai) on bass!  We’d be celebrating the life of one of my favorite bass players – Wes Wehmiller – in a frenzy of groovy rockin’ fun.

This would be the PERFECT opportunity to live out my rock n roll fantasy of playing a Led Zeppelin song live!  I’d choose a song that didn’t require more than a trio, that had killer guitar riffs, a sexy vocal line, and that generally ROCKED.  Black Dog was perfect.

But it was hard!  The guitar part itself wasn’t tricky, but learning to sing and play the chorus sections simultaneously took quite a bit of practice.  Fortunately, I had three months to (literally) get my act together.  I determined that I’d devote an hour a day to learning the song, note for note, both vocally and guitar-wise.

Some days, I’d focus on the guitar.  I studied Jimmy’s rhythm playing, learned the groovy solo at the end of the song, and decided which riffs I wanted to keep (the iconic ones) and which I didn’t mind deviating from. I practiced playing with the live recording from “How The West Was Won,” as well as the studio recording.  I practiced both at super-loud volumes (sorry, neighbors!) and without an amp, so I wasn’t too used to playing with lots of effects and distortion (I wasn’t sure what kind of sound I’d have live, as I’d be using someone else’s amp and would have no sound check). I practiced till my fingers hurt (but never my wrists — any time my wrists hurt, I stop immediately).

Some days I’d focus on the vocals.  I warmed up for 30 minutes and sang my heart out with the record.  I studied vocal lines in the car as I was stuck in LA traffic.  I listened to the studio version as well as the live version and thoughtfully chose which melody lines to sing – studio or live (so some combination of the two), for each line of the song. I memorized the lyrics and the unconventional song structure (or so I thought…keep reading).

Throughout this process, I was nervous.  I wanted to kick ASS on this song – this performance was SO important to me, not because of any external factor, but because I wanted to do justice to the music I love so deeply.  But I did my best to remind myself that my main job (after all of my practicing) was to get up on that stage and simply have a blast. 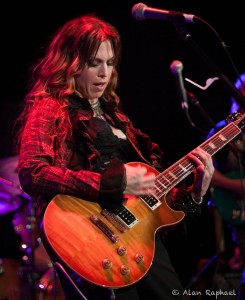 And have a blast I did.  The performance wasn’t perfect – at one point, I was having SO much fun and was SO lost in the moment that I literally got LOST in the moment – I screwed up the song form and had to restart the second refrain! (If you look for it you’ll probably catch the edit point in the video).  One other funny mishap that I didn’t even REALIZE during my performance was that my guitar tech had thoughtfully inserted a pick into my guitar strings for me, but I didn’t see it when I picked up the guitar and I started playing the song with the pick I had brought onstage with me.  There was a pick was caught in the strings for almost the ENTIRE song (you’ll see it on the video – it finally falls to the ground towards the end of the song). Thankfully (and strangely) it made NO difference in my playing – I had no idea it had happened until my guitar tech told me after I walked offstage!

Overall, those six minutes onstage comprised one of the highlights of my career: a fun and exhilarating performance of an epic song in front of a packed house on the Sunset Strip — what more could a girl ask for?

To do it AGAIN, of course!